Jean/Jane Durnford married John Butt 14 Oct 1800 at Winterborne Stickland, Dorset. She is said to be the daughter of Thomas Durnford and Mary Ball but at this time of looking once again at Jean/Jane I have not found anything further about her nor is it possible to verify her parents having been given them by another researcher back in 2004. The date of baptism was also given as 29 Sep 1771 at Winterborne Stickland which is about three years earlier than the death registration indicated but will not let that determine my final thought as it could be in error.

John and Jane Butt had seven children baptized at either Winterbourne Stickland or Winterbourne Clenstone (mostly at Stickland). These two places are very close together with Clenstone being a very small village where my husband and I spent a short while in 2008. Their eldest son Charles married Hannah Arnold (the Arnold family will be the next 52 Ancestor Challenge) 26 Dec 1820 at Winterbourne Clenstone. Their daughter Louisa married Samuel Knight 7 Sep 1849 at Winterbourne Stickland and their eldest daughter Maria Jane married Edward Blake 29 Oct 1870 at Upper Clatford and they were my great grandparents.

Possible matches at Find My Past:

The daughters of John Butt and Jean Durnford are named Maria and Bethaniah so that isn't helpful in determining the correct parents although Mary Ball comes closest. I have pretty much left this alone the last ten years because I couldn't find anything to prove the Thomas Durnford and Mary Ball incorrect.

Since there are very few Durnford families in Dorset I think looking at Wiltshire is a reasonable thought. However, I am really stepping out of the box as most people are sticking with Thomas Durnford and Mary Ball which I find to be a dead end in terms of learning anything about them.
Given the names of their sons I am left to wonder if Jane's father is Thomas since the sons are named: Charles, George, Joseph, Robert and Stephen.

After ten years of being brickwalled with all the online records I am left to wonder if Thomas Durnford married to Mary Ball really exists. Why didn't John Butt and Jane Durnford name one of their sons Thomas. Mind you the name Thomas does appear in great grandsons of this couple.  However this could have more to do with the forenames of some of the inlaws that married into the Butt family.

This is not a day of great gains but more a day of refreshing what I do know about Jane Durnford and it is still not very much. Lots about her descendants nothing particularly about her ancestors. I have made the decision however to change my website to remove the earlier information.

I am left with the thought that her name is simply spelled completely wrong on the marriage registration. I did a search on Find My Past and found in the area of Winterborne Stickland:

Have I perhaps solved a mystery. That Jane/Jean's surname is actually O'Ford? The process of proving it could be rather interesting!  There is only one entry for O'Ford in FreeBMD but there are a number of entries on Find My Past for this family in Dorset. Did the name simply change? The name Oxford appears in Free BMD in Dorset in this area. What happens to the O'Ford surname in Dorset? The OPC Dorset site for Milton Abbas does not have the baptism I found on Find My Past. There is both an Oxford and an O'Ford family at Milton Abbas. There is also an Alford  and an Elford family at Milton Abbas. This is a mystery that I would love to solve. I suspect that I may be moving to the correct path. The surname O'Ford is not listed in Reaney or Titford (Dictionaries of English Surnames), nor is it listed in MacLysaght's surnames of Ireland. It is also not listed in Rowlands Surnames of Wales. Did the priest who married John Butt and Jane Durnford mishear the name Durnford? Looking at their marriage registration I note that William Elford has signed as a witness along with William Tizzard. John Butt (husband of this Jane) also signed the parish register. Both of these men William Tizzard and William Elford) did sign the registers on occasion so did not think anything of that. But there is a William O'Ford baptizing a daughter Jane 1769 at Winterborne Stickland. The year of birth seems too early but the coincidence is amazing. I never see anyone writing the name Durnford. Everytime it is written it is the priest writing it. I would be more curious about the daughter of Thomas and Ann from Milton Abbas as being the correct Jane just because of the year of baptism. The record that was originally used by most people is from Family Search: 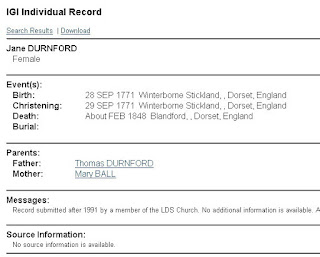 It is a patron submission and I think it is just incorrect as I can not find this couple anywhere including in All Cannings where the Durnford family is quite numerous. I am noting however that the father was Thomas and that the Thomas O'Ford at Milton Abbas is baptizing a daughter Jane in 1773. But can I find a Thomas O'Ford marrying an Ann? There is a Thomas Elford buried 30 Sep 1798 at Winterborne Stickland.

Marriages of O'Ford at Winterborne Stickland:

Finding Bethiah is very very interesting. Thomas O'Ford baptized 23 Jan 1729 as mentioned is also the son of John and Frances. John O'Ford is baptized 20 Sep 1728 at Milton Abbas son of John and Frances. What can I find out about John and Frances O'Ford? Also Thomas O'Ford at Milton Abbas baptized a daughter Jane in 1773. I feel that I have within that measure of doubt found a reasonable family line for Jane. Certainly the other line can not be proven. I am curious if I will receive any comments on this blog from my relatives in Australia who have studied the Butt family in great detail! and also cousins in England who have done the same. This could also, perhaps, account for some of that Irish ancestry that I appear to have with my DNA testing. Jane is my 4x great grandmother and could have influence on my ethnicity. The oldest entries appear to be in the 1720s. I do not find this surname in the Discovery Catalogue on the National Archives website.

In total there are 551 results for the O'Ford surname in Dorset on Find My Past. There are 1773 O'Fords in a general search on Find My Past for Britain. Of the first 40 entries, 39 are in London in the Westminster Rate Books.There are a few records in the late 1600s in London. Some of these surnames are spelled Oford. When I get a chance I will update my webpage!